I’m a little late on getting to this but thought I’d tell you a little to go along with the videos.

It’s Friday and we head off around noon to go have a weekend of camping. I’m joined with Penny and Jesse, two other vols, and we’re going south. I really actually have no idea where we’re going, but it’s always great to get out and see more of Namibia. I also quickly find out that we aren’t coming back to Opuwo until Monday and here I haven’t told my boss…I hope he forgives my afterthought.

I hop myself in the backseat and prepare for the open expanses of road that Namibia is so fond of. I play some music for the women and they quickly find my music to be too awesome so I put my headphones in and spend the rest of the trip with my music and thoughts. I catch numerous naps in there as well. 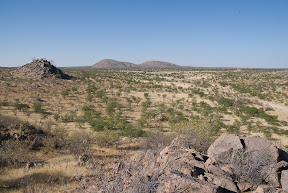 I wake up and we’re at the campsite. I know that we’re by the west gate of Etosha, but other than that I have put myself at the mercy of others. Looks like a cool place, lots of big rocks, hills and nice white trees. We plop ourselves down at designated campsite 4errrr…that one is taken….campsite 5, set up camp and are quickly overtaken by the mini-special forces-flies. I have not been attacked like this in a while. The women retreat to the tent while I start on the wine and try not to think about the bugs. I am not very good at detaching mind from body so my next course of action is to shower and get rid of all unnatural smells…this kind of helps. My next plan is to hike and keep moving as a moving target is much harder to hit. Even better, but now I’m sweating and the bugs love any liquid. Once realizing that there is no way to win the sun starts to set and the bugs retreat.

I have a few questions. We’re in the middle of presumably nowhere and within 5 seconds we are attacked by flies. How does this happen? What/who do these flies annoy when no one is around?

Next I start making dinner, we’re doing a chicken braii with some sweet potatoes, onions and cherry tomatoes. This is about 6pm. Fire is good to go, sun sets, food is placed on the fire. 6:30pm it’s dark. Our camping neighbors, family of 5, are already in bed…What? I keep running this through my head over and over but can’t seem to make sense of it. You come all the way to Namibia for car top camping and you go to bed at 6:30pm? We think maybe they’re getting up early…nope. Maybe they are jetlagged…nope…from Europe so it’s the same time zone. Anyone have any ideas out there?

Dinner was good, wine was good, no bugs was good, marshmallows were good…nap time. Day 2 coming up and again, I really had no idea where we were going.

This site uses Akismet to reduce spam. Learn how your comment data is processed.